Kymm McLayne is kind to animals and looks like a vamped-up Snow White, so it makes perfect sense for her to name one of her businesses “Who’s the Fairest”. She isn’t, however, known to “sleep” on the important issues. She is a stylist by profession, a philanthropist by calling, and a vegan by choice. She first caught my eye while she was sharing her journey to becoming a healthier version of herself, dropping many pounds, and just changing her eating habits plus relationship with food. The results were so monumental that she wanted to share this adventure and all of the recipes with the world, being a testament to her generosity. 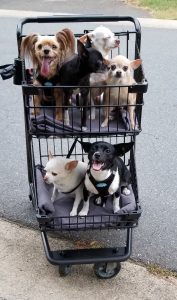 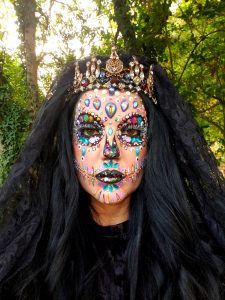 I have been following McLayne’s story for more than a decade . She doesn’t just make the world a prettier place beautifying others, she is a championed social media influencer who pushes everyone to be better people by her example. She came at it honestly, as her mother has a soft spot in her heart for the homeless and is a self-ascribed crazy cat lady who finds time to keep feral colonies completely stocked, while dealing with her Lyme disease, recovering from colon surgery, and smashing her breast cancer.

To get to know McLayne, you need to know that dogs are just as much a part of her brand as are Mac Cosmetics. Her favourite breed is the tea cup Chihuahua and she is known to have more than a handful of her own, not counting her fosters. Still reeling from the loss of her first dog, Spooky, McLayne has a whole slew of rescues (youngest is Echo, Sugar, Peanut, Angel, Kiki, Minnie, and Molly who plays the mama role).

At any given time, she has fosters that she will personally transport to the proper home and has taken them as far as New York state. Chesney Challenge, Akanke, Junior, Sarafina, Miss Novah, and so many more have been in her home, which, by the way, is open to anyone from natural disaster evacuees to the “discarded” pet. She is very transparent about her success stories and the occasional “fail”. Having to rehome a set of triplets (Hansel, Greta, and Snoopy) was very hard for her, but the joy she continuously puts in so many lives is the pay-off.

She is instrumental is placing over a hundred pets (cats, too) into their new homes, including My City Magazine’s mixologist’s third dog Sugar Biscuit, who McLayne helped our Sabrina obtain. She works on this effort daily. Assisting in dog adoptions (through places like Take me Home Pet Rescue) and volunteering for non-profits (like the Humane Society) is what she does when she is not working. She doesn’t just care deeply about animals, she gets hands-on with our veterans (at places like the Independence Fund), spends hours picking up donations for individuals and families that need a little relief, will (literally) roll-up on single mothers on the street corner with diapers and money, and donates her time empowering women or educating others at career fairs.

McLayne is a celebrated stylist who does makeup and hair (up-do’s, curl, style). She can overhaul your closet or give you a fresh face for a party. Coloured lens, prosthetics, jewels, airbrush, scarring fluid, metallic temporary tattoos, and regular ol‘ civilian makeup are just a number of tools in her box and she loves to have fun with wigs, cage veils, and hair rings, not just as a stylist, but as a model. She is a big fan of local Ambur Rose’s headpieces. She can appreciate the time put into a handcrafted piece, as some of her special F/X creations can take upward of eight hours.

She is not stingy with her time, her money, or her knowledge and is the walking, talking epitome of the belief that if you have abundance, you build a longer table. She came back from Los Angeles to be near family, but while there, she sold her clothing on Melrose and styled musicians, models, and otherwise famous folks. Charlotte is lucky to have her here available for photography, closet coordination, décor and design, spa services, image consulting, and as a mobile or in-studio make-up artist / instructor (alongside her team of over a dozen stylists). She just became a Certified Wellness Coach, has done cooking classes at a local Williams & Sonoma, has been seen teaching at CPCC in the cosmetology department, donates her time and income to so many causes, and brings smiles to little girls at birthday parties. She studs her own boots, makes gift baskets, wraps presents like a pro (year ‘round), and will even go to battle for tattoos in the workplace and our gays … when she is not mentoring a worthy, young person.

In her downtime, she is still creating, often supporting Deborah Triplet’s #YardArtDay with benches covered in vinyl records. She has colourful chairs hanging from her trees and, if you’re lucky enough to see inside her home, she creates many of her own furnishings including, but not limited to, gypsy-rag curtains, cabinets covered in CDs, and whimsical strands she crafted to hang from the chandeliers. She can been seen often in black on black on black with her best friend and colleague, Jessica Knoll Fernandez, or walking around teaching folks how to DIY a watering station with poop bags for your neighbourhoods. She plugs all of her favourite spots and supports so many local businesses (hello, Subscreto and Social Lounge).

You can view her doing tutorials on subjects such as makeup application, how-to’s for magnetic lashes and extensions, and, of course, there is glitter. She is humourous, useful, sincere, and constantly present in a world full of distractions. Her blog, BITE, urges you to “plant, grow, and thrive” and is extremely incomparable to like ones. Obsessed with Halloween, yet bourne on Christmas, she is a fresh breath of air in our community with her openness about sexual assault and recovery, simply because she’s a sucker for emotional support and therapy pet stories, due to the fact that she considers the white squirrel her spirit animal, and, let’s just face it, she IS just all around great. AND since you didn’t get her a birthday present, belated is always okay. You can send her puppy pee pads, “Big Damn Band” merch, or gift cards. Even fairy Godmother’s need love, too. 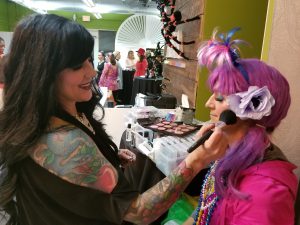