Emily Walters is the one and only daughter of the (famous) Charlotte based musician Patrick Walters of the Spongetones. She came at it honestly, singing like a bird, and being able to “name that tune” just a couple of grooves in on almost any album. Always waiting tables (I met her at 300 East Restaurant in the 1990’s), she consistently has had more than one hustle. Recently having cared for her ailing mother, Walters discovered yet another thing at which she excels. Being homebound, she made jewelry mostly out of boredom, as she is quite the busy body, and has come to monetize this hobby calling it Em & Lu Design. Her femininity in design and respect for her matriarchy comes through in the name as Louise was her grandmother’s and is her middle name. As a continued nod to her recently just late mother, Debbie, and lucky for the consumer, Walters keeps making her jewelry. You can catch her out vending occasionally and is usually present at the third Saturdays of every month at the NoDa Super Flea at the Company Store. You can also keep up with her at the links below. Walters calls her handmade jewelry “flair for the modern boho babe”. I call it just another skill set for this lovely lady’s resume. 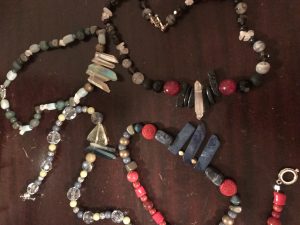 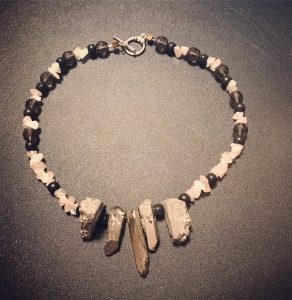